On November 29, 2019, at Sinan Erdem Sports Hall in Istanbul, Shane Larkin had a night he will never forget. It was near the start of his second season with Anadolu Efes, a Turkish professional basketball team playing in the EuroLeague.

This is not where Shane had seen himself being five years earlier, fresh off his rookie season in the NBA. But a tumultuous five-year journey had brought him here, to a place that felt more comfortable than any other place he’d played as a pro. And on that night, Shane scored 49 points, a EuroLeague record that hadn’t been matched since the year 2000. But more than those points, Shane found what he’d been looking for: a place to thrive. 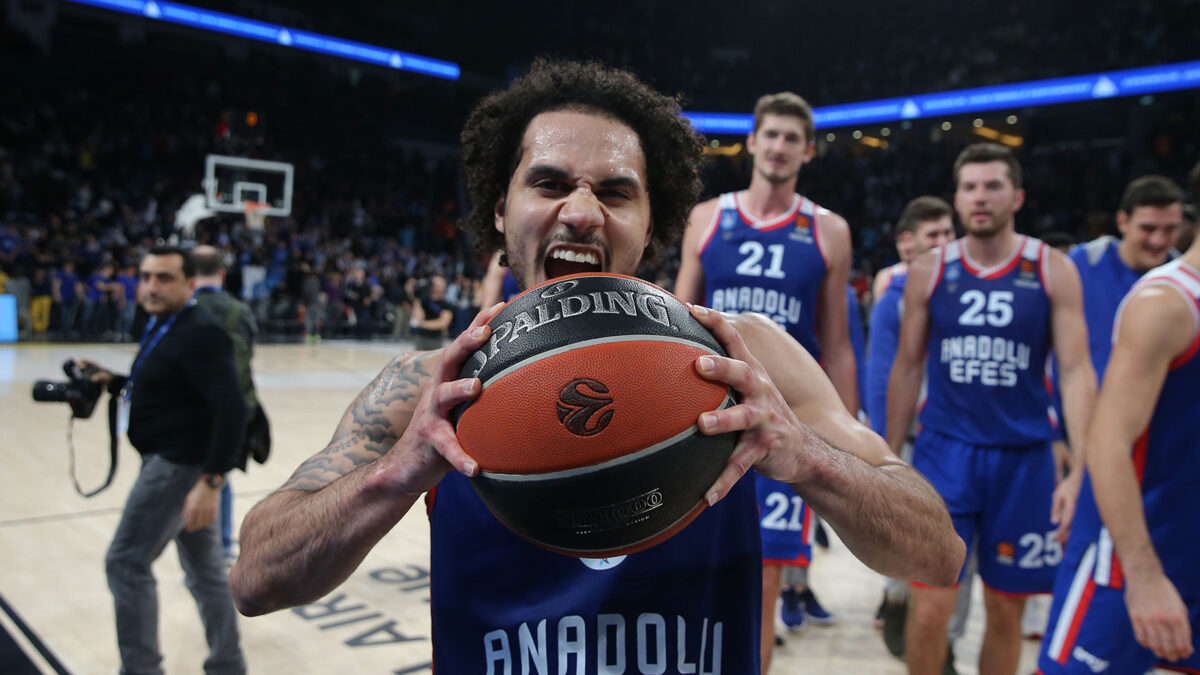 Shane’s road to Turkey and Anadolu Efes is as unique as it is fortuitous.

Born in Cincinnati, Ohio, U.S.A., where his last name is synonymous with a different sport, Shane was drawn to basketball at a young age. The son of Cincinnati Reds shortstop and Hall of Famer, Barry Larkin, Shane was groomed to play on a diamond, not the hardwood. But he yearned for more control of the ball, and so it was basketball that became his love.

“I was a hyper kid, so I didn’t want to play baseball and wait for the ball to come to me,” Shane told USA Today. “I wanted to play a sport where I could go get the ball.”

Get the ball he did, excelling at Dr. Phillips High School in Orlando, Florida, as a two-time All-State selection and while averaging 18-6-6 as a senior. College recruiters came in waves and Shane eventually chose DePaul. However, Shane’s time in Chicago ended before it even began as his lifelong battle with obsessive compulsive disorder (OCD) made his stay there untenable. He petitioned the NCAA for a medical transfer waiver and chose to move back closer to home, transferring to the University of Miami.

Like Shane’s last name, Miami was synonymous with another sport—football—but that also didn’t last long. Shane elevated the Hurricanes basketball program to new heights. After getting his feet wet at the college level as a freshman in 2011-12, Shane took the reins of the Hurricanes during the 2012-13 season and led Miami to a 29-7 record, the ACC regular season title and the ACC tournament championship. A No. 2 seed in the NCAA Tournament, the Hurricanes won two games and made it to the Sweet 16 before falling there in a battle with Marquette. 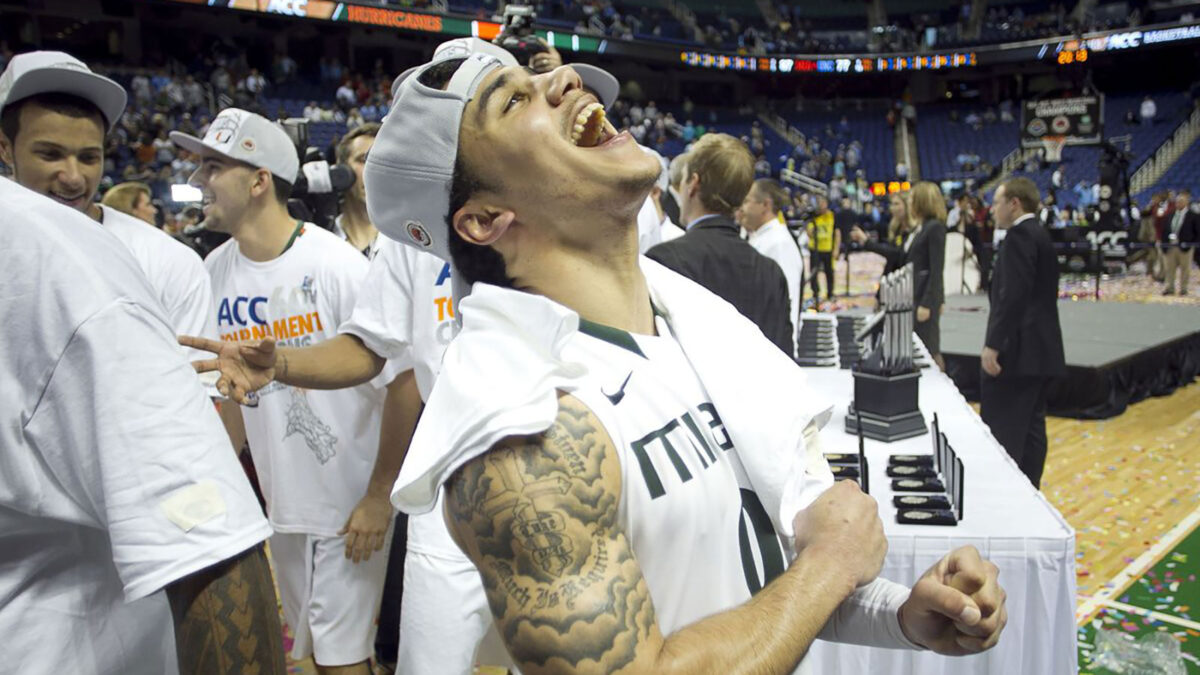 The sensational sophomore season raised Shane’s national profile and made him a hot commodity in NBA scouting circles. So Shane made the decision to forego his final two seasons at Miami and enter the NBA Draft.

On June 27, 2013, Shane saw a dream realized when he was selected 18th overall by the Atlanta Hawks. A draft night trade sent Shane from the Hawks to the Dallas Mavericks, where he was set to join a squad led by a pair of future Hall of Famers, Dirk Nowitzki and Vince Carter.

The very veteran Mavs didn’t have a ton of playing time for Shane as a rookie. He played in 48 games, but managed just 10 minutes per contest. However, he flashed his potential when he saw extended playing time. In a January 17 contest against the Phoenix Suns, Shane played a season-high 26 minutes and made the most of it, scoring 18 points on 6-of-8 from the field and adding five assists and a pair of steals in a three-point Dallas win. The Mavs made the playoffs but were eliminated in the first round by the eventual NBA champions, the San Antonio Spurs.

Following that playoff ouster, the Mavs set out to remake their roster and included Shane in a trade to the New York Knicks that sent Tyson Chandler and Raymond Felton to Dallas. 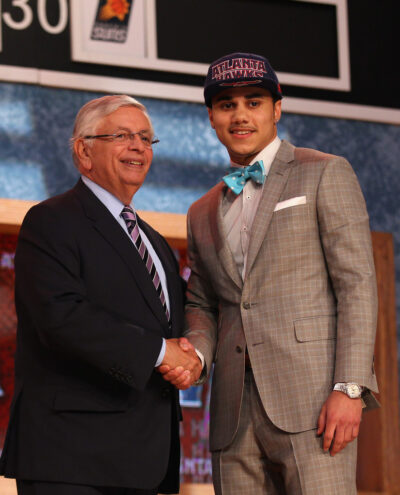 Shane was selected by Atlanta with the 18th pick of the 2013 NBA Draft, then traded to Dallas.

In New York, playing for first-year coach Derek Fisher, Shane received a bigger opportunity. He played in 76 of the team’s 82 games, including 22 starts at point guard. Shane’s role fluctuated throughout the season and with it, so did his statistics. He averaged 6.2 points, 3 assists and 1.2 steals per game, but those numbers weren’t entirely indicative of his development throughout the year.

More illustrative of that progress were some of his individual performances late in that lost season for New York. In February, he posted a season-high 16 points in a win over Detroit. And in April, just a few days before the end of the season, he nearly posted a triple-double, scoring 15 points, grabbing 11 rebounds and dishing out seven assists in a victory over the Philadelphia 76ers.

Following his sophomore season in New York, Shane elected free agency and though he remained in the City That Never Sleeps, he made the move across the famous Brooklyn Bridge to join the Nets. In Brooklyn, he again saw his role fluctuate. He started 17 games, but played less per game on average than he had with the Knicks. Despite that, his scoring and assist averages ticked up to 7.3 ppg and 4.4 apg.

However, Shane grew frustrated with his fluctuating NBA roles and sought the opportunity to play and post those numbers more consistently. Following the 2015-16 NBA season he headed overseas, signing with Baskonia in Spain. Over the course of the EuroLeague and Liga ACB seasons, Shane carved out a more consistent role and flourished, averaging 13.5 points and 5.3 assists per game.

His success in Spain earned Shane another shot in the NBA as he signed with the Boston Celtics for the 2017-18 season. On a Boston team with Finals aspirations after signing Gordon Hayward and trading for Kyrie Irving, Shane found himself in a strictly reserve role, averaging just 14 minutes per game. But once more, he flashed his potential in the final days of the season, getting a start in Boston’s regular season finale and again flirting with a triple double with 12 points, 10 rebounds and 7 assists in a win over his former team the Nets.

Shane’s play in that game got the attention of Celtics staff and he found himself in an increased role to start the postseason. In Boston’s first round series with the Milwaukee Bucks, he averaged more than 15 minutes per game, highlighted by an 11-point effort while playing 20 minutes in the Celtics’ Game 2 win. Shane continued to shine in reserve in Boston’s Eastern Conference Semifinals series with the Philadelphia 76ers until a shoulder injury suffered in Game 4 ended his postseason prematurely. The Celtics made it to Game 7 of the Eastern Conference Finals that year, but lost the series to the Cavaliers.

Despite enjoying his most promising NBA run yet with the Celtics, Shane still desired a bigger role and opted to head back overseas, signing with Anadolu Efes in the summer of 2018.

In Istanbul, everything finally came together for Shane for the first time at the professional level. He played 35 EuroLeague games for Efes and averaged better than 20 points per game. In a March 8, 2019, win over Barcelona, he scored a career-high 37 points and was named Round 25 MVP. Efes reached the EuroLeague Final Four and in the semifinal, Shane’s 30-7-7 line led them to a win over Fenerbache with a record 43 performance index rating (PIR) for Shane in the process. He added a EuroLeague final record 29 points in the championship match against CSKA Moscow, but Efes came up short of the win.

The team did win the Turkish Basketbol Super Ligi championship, with Shane starring in the Finals and posting 38 points in Game 7 to once again top Fenerbache. The performance earned Shane BSL Finals MVP honors, and Efes’ first league title in 10 years.

Anadolu Efes was en route to an even bigger season in 2019-20 before the COVID-19 pandemic shut the season down prematurely. After Shane missed the opener, he returned and gave Efes a boost that led to a four-game winning streak. A loss to Panathinaikos in Round 6 only served to motivate Shane as he led Efes on another streak, this one capped by that incredible night in November.

Shane’s 49 points against Bayern Munich were a single game record since the year 2000. How he did it was perhaps the most remarkable thing of all. Thirty of his 49 points came on three pointers as he drained 10-of-13 from beyond the arc. His PIR for the game was an eye-popping 53. Shane continued to star for the entirety of the 2019-20 Anadolu Efes campaign. He scored at least 20 points in 17 of the 25 games he played, including all but one of the final 10. He was well on his way to EuroLeague MVP honors before COVID put an end to the season.

The last game before the shutdown was a fitting encore to the 49-point night as he poured in 40 points on Olympiakos, again drilling 10 threes in the rout as Efes finished with a flourish. They secured wins in 12 of their final 13 and 20 of their final 22 games, finishing with a record of 24-4. Shane ended the season with an average of 25.8 points per game, which led the league by more than three points per game.

In the midst of his would-be MVP season, Shane made a decision that had been weighing heavily on his mind since he settled down in Turkey and applied for Turkish citizenship. A few months later, he was added to the Turkish National Team roster. He made his Turkish National Team debut on November 27, 2020, almost a year to the day of his famous 49-point night.

As Efes digs in for the 2020-21 season, Shane is committed to giving it his all to get back to the EuroLeague Final and this time lifting the Cup.

“I’m happy to be here and I’m happy to have another opportunity to win a EuroLeague championship,” Shane told EuroHoops. “I’m back in Efes where I love to be. Back in a country where I love living. I love my life, love my situation here in Efes, love being in Istanbul. We’re now going to make the best out of this season and try to get what we’ve been chasing for the last three years.”